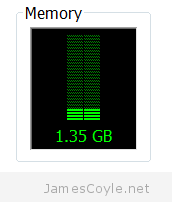 In my humble opinion this article must also explain that in the Task Manager we would not see a pattern of decreasing memory, which actually does not indicate some memory leak from our application, as mentioned here: http://stackoverflow.com/a/12017470/948268

Unfortunately, this is incorrect:

> Memory – Commit Size – is the amount of virtual memory which is reserved, or committed, for the process.

Commit size does not reflect reserved memory. It wouldn’t make much sense if it did.

Also, Working Set counts only memory that is resident in RAM.