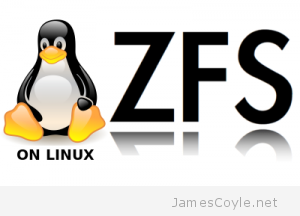 ZFS is a disk and logical volume manager combining raid like functionality with guaranteeing data integrity. Every block of data read by ZFS is checksumed and recovered if an error is found. ZFS also periodically checks the entire file system for any silent corruption which may have occurred since the data was written.

ZFS was initially developed by Sun for use in Solaris and as such was not available on Linux distributions. Thanks to some clever guys over at ZFS on Linux, this has now changed. We can now install the ZFS on most Linux distributions such as Debain/ Ubuntu and Red Hat/ CentOS.

ZFS provides a data volume which can have multiple mount points, spanning multiple disks. Disks can be combined into virtual groups to allow for various redundancy options: 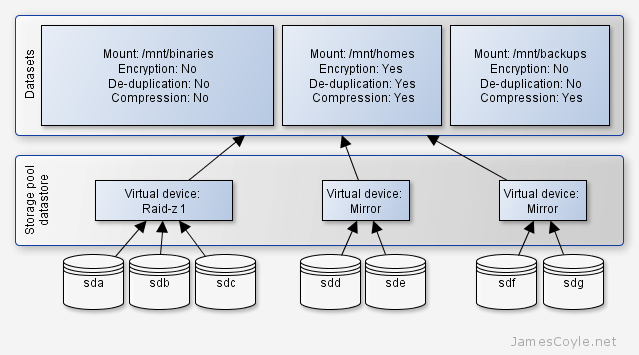 In addition to these virtual groups, multiple groups can be combined. For example, you can mirror a striped virtual volume to create a RAID 10. This gives the added performance of striped volumes with the redundancy of mirrored volumes.

For our below example, we are going to create a single RAIDZ 1 with three disks. This gives us two full disks of storage, and a further disk for parity.

Before we can start using ZFS, we need to install it. Simply add the repository to apt-get with the following command:

In a minimum package install, you may not have the apt-add-repository installed.

If this is the case, install it before running the apt-add-repository command.

Update the apt cache with the update argument

Install the ZFS binaries, tools and kernel modules. This may take a while due to the amount of packages apt will have to download, building the tools and the ZFS modules for the kernel.

At this point, it is best to test the kernel was correctly compiled and loaded.

The output should look like below. If it does not try running modprobe zfs.

Once ZFS is installed, we can create a virtual volume of our three disks. The three disks should all be the same size, if they are not the smallest disk’s size will be used on all three disks.

Identify the disks you would like to use with fdisk. Some disk controllers may have their own naming conventions and administration tools but we’ll use fdisk in this example. Whilst we are on this point, raid controllers should not be set up with raid functionality when using ZFS. Some of the mechanisms in ZFS can be fooled with an underlying layer also doing data parity and therefore data corruption can occur in this environment.

And there we have it! The three disks to add to our ZFS array. Note, I have removed the root volume in this example to avoid confusion.

Run the zpool create command passing in the disks to use for the array as arguments. By specifying the argument -f it removes the need to create partitions on the disks prior to creating the array. This command creates a zpool called datastore however you can change this to suit your needs.

Confirm the zpool has been created with:

The output should be similar to:

At this point, we now have a zpool spanning three disks. One of these is used for parity, giving us the chance to recover in the event of a single disk failure. The next step is to make the volume usable and add features such as compression, encryption or de-duplication.

Multiple datasets or mount points can be created on a single volume. Generally, you do not specify these size of these. Put simply, the storage of the zpool with be available to any dataset as it requires it. You can set up quotas to manage dataset sizes but that won’t be covered in this tutorial.

What we are interested in is creating three volumes; binaries, homes and backups. These will be mounted at /mnt/binaries, /mnt/homes and /mnt/backups respectively. Using zfs create command, create the three required volumes.

We specify the mount point, zpool and dataset name in the command.

Test the datasets have been created with zfs list.

And an ls in /mnt should give us the mount points.

You can now use your mounted datasets as required. You can export them as NFS, CIFS or simply use them as local storage!

See my other posts for compression and encryption. Please note, encryption is not currently available on ZFS for Linux.

I am also building a gluster on ZFS and wonder if you hit the issues on space not getting release on zfs after file deletion and the Nfs quota on gluster not able to set.

Thank you for your guidance
Peter

I have not used the NFS quota on ZFS but the free space is certainly released as files are added and removed.

Hello… My Server “Xeon 4core, 4gb ram, 1 500gb drive for OS and 3 2TB drive for ZFS Volume. I followed this instruction and everything worked, except the performance of the zfs volume was terrible, inside linux I would only get 67mb/s , over the network on gigabit 40mb/s that was terrible.. so after some research I installed this “apt-get install zfs-initramfs” and restarted my server,.. it messed up my dataset I had to recreate it , but now i get between 250 and 300mb/s and over the network(samba) I max out at 120mb/s . Love my server.. running as a Data Server and Media Server with Plex. works great

Excellent Article James. I just wrapped up building a test container. I’m looking at this for my small office storage (I will also admit, I have had a lot of interest in ZFS for years, but just now getting a chance to play). A question, de-duplicating files and performance – what sort of impact have you seen, have you tested it?

I also am going to run through your tutorial on compression and replication :)

Thanks for your time building these, I know how much time these things take. I appreciate it.

ZFS, in my mind at least, is one of the best FSs out there – offering encryption, redundancy, compression, and an east to administer tool-set.

I have a single pool of 15 x 2TB disks which is used for a bunch of things. I only have about 10GB of files using de-duplication – around 50k of files – and the performance is sufficient for my needs. I don’t have any benchmark results I can publish but my feel for it is that the performance is reduced, but not hugely. It consumes massive amount of RAM, however, so you’ll need to make sure you have the hardware and only use dedupe on data that will benefit from it.

Once you have ZFS set up, run the below command and multiply the block total by 320 to see how much RAM will be required to de-dupe the files on the pool:
zdb -S mypoolname

how to create volume group(one) out of two disk ?

These are your disks.

hi, request you to share the tutorial on compression and replication. Would like to go through. All of your write ups on zfs gluster and ceph are interesting.

This is not a zfs volume what you show here.