This is a reminder for myself more than anything else, on how to get wget to download SSL internet content when it’s encrypted by a self-signed or otherwise unknown certificate.

The quickest way round this, albeit not the safest, is to tell wget to ignore any certificate checks and download the file. To do this, add the –no-check-certificate to your wget command. I don’t know why the wget developers couldn’t have chosen a switch that’s easier to remember!

Apt-get error: E: The method driver /usr/lib/apt/methods/https could not be found

I’ve been getting the following error when using apt-get update with Debian Wheezy recently.

It seems that apt-get only supports HTTP connections by default, and throws an error with any HTTPS URLs.  You’ll likely see this error message if you add a new apt source URL that starts with https. What’s most annoying is that apt doesn’t simply ignore the HTTPS URL when updating the local cache, it actually stops all updates regardless of URL schema.

Luckily the fix is easy and requires an additional apt package to handle the SSL URLs. Run the below command to install the apt-transport-https package to enable apt to use HTTPS URL lists.

Once this is installed, apt should function and update its local cache from your apt lists.

As of Zentyal version 4.2 the bundled certificate authority (CA) module is creating signed certificates using the SHA-1 algorithm which is an old algorithm and pretty much deprecated.

Google Chrome, for example, will give a warning when accessing any SSL page that’s encrypted stating that your connection is not secure.

And look for default_md within the file. It will currently show as sha1 like below:

Edit the value and enter sha256.

You’ll then need to log into the Zentyal Admin site and revoke and re-issue all of your sha1 certificates.

I’ve submitted a pull request on Github to have the default changed for new installations.

It’s never been easier to set up your own Git server to host your own git repositories for your projects. Thanks to people like the folks over at GitLab you can be up and running in no time at all. 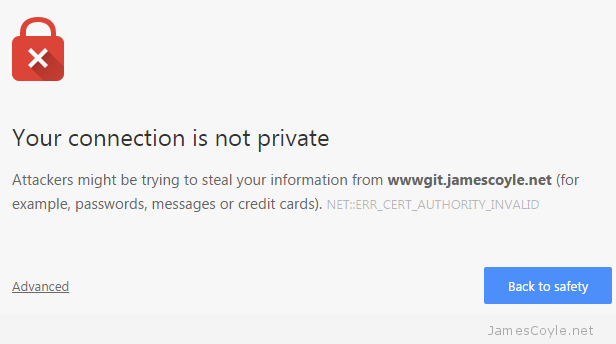 With Git, however, you’ll get an error from the git command line tool similar to the below:

There are two Git specific methods of forcing Git to accept the self signed certificates, which don’t require you to import the CA certificate to your computers Trusted  CA store:

You can stop the Git client from verifying your servers certificate and to trust all SSL certificates you use with the Git client. This has it’s own security risks as you would not be warned if there was a valid problem with the server you are trying to connect to.

That said, it’s the quickest and easiest fix for a non trusted server certificate. Simply run the below git command on your Git client.

Another option is to point your Git client towards a folder that contains the Certificate Authority certificate that was used to sign your Git server’s SSL certificate. You may not have one of these if you’re using Self Signed certificates.