Somewhat off-topic today, but something that I’ve recorded here to showcase the current state and see if anyone else is getting similar issues.

A colleague of mine and I have been measuring our broadband speeds since the start of the year. We both live in Nottingham and pay for a residential Virgin Media 200mbps line which I pay approximately £45 each month.

Given the data logged, we’ve concluded that our upload is typically fine at 12mbps but the download varies massively – to the point where single session streaming from Youtube/Netflix is unusable.

This next one shows the number of counts recorded at a given speed range for the best time (5am) and worse time (9pm). As you can see at 9pm I mostly get between 30mbps and 80mbps

Another way to look at this is via a heatmap showing counts for all speed groups by hour: 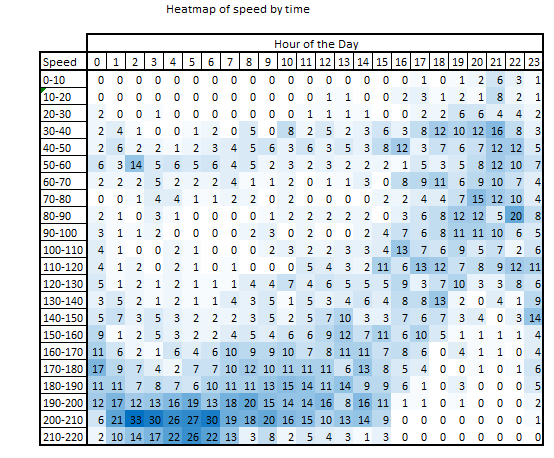 We then wondered what the cost implication of this could be, if we only paid for what we got. The table below shows calculations of the cost impact. It is based on cost per month divided by 24 (number of hours) then working out the modified hourly rate based on that percentage. 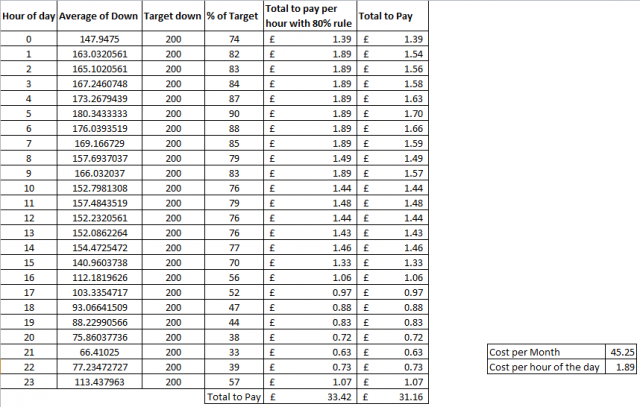 Being fair, I would ignore speeds where the fluctuation is less than 20% and pay the full price for that hour. An 80% drop in speed is perfectly reasonable in my book and something that probably wouldn’t be noticed by most people. Using the above calculation the result would be a cost of £33.42, meaning I’m overcharged by ~35%.

These are average speeds, and as shown above the download speed can be much lower than this average and it’s at these points the impact to me is most interruptive to me and this cost isn’t reflected above. 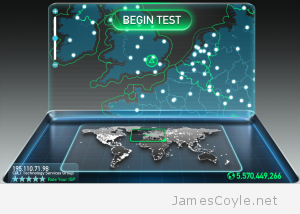 Matt Martez has kindly created and shared a Python script for interacting with speedtest.net for testing bandwidth to the internet from the command line. This is a great script which only has the dependency of Python – something which is available on most Linux distributions.

Grab the script with wget to the server you wish to test. Remember, this is to test the bandwidth to servers which are publically available on the internet – this does not test your internal server to server communication. See Iperf for details on testing LAN bandwidth.

You can use the –help switch to see all the options you have with the tool.